we arrived in Queenstown again on Thursday evening.
I had booked the nights left at The Flaming Kiwi to go back where I had made friends before, and in fact, the first people I saw were Yin and Alex.
Yin had been touring around Queenstown and it’s surroundings, and on Friday she was going to try the burgers at Fergburger (everyone I’ve met that has been to Queenstown talks of this burgers as “the best ever”), so I told her I would join her to try them as well.

then I went with Jon to find him a hostel because The Flaming Kiwi had no beds left. he stayed at another at the end of the road, but just for the night, because next day he was starting to work for accommodation at the X-Base Backpackers.

Joel came home after work and we cooked some dinner for the both of us. again, we were back in our little routine of cooking and watching movies all night. 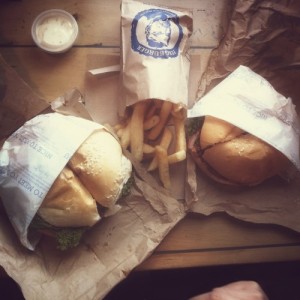 of course, after that, we were about to have food coma, so we decided to walk a little bit on the lakeside. 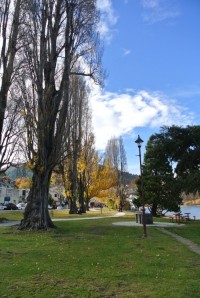 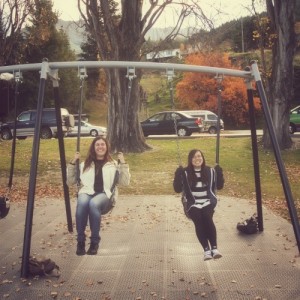 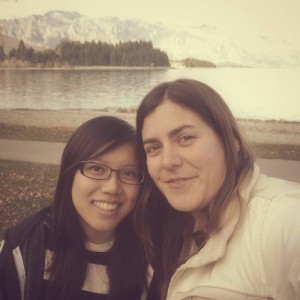 we then met with Jon and Cam (the Canadian) to have ice cream and talk some nonsense.

back in the hostel I waited for Joel to come from work to go buy groceries. we decided to cook some Mexican tacos, and I have no idea how I managed to eat them after the gross lunch I had… but I did… and of course, I had food coma again.

next day we didn’t do much… we walked around town, then visited Jon in his new home to say hi and give him back some of his stuff (yeah! like a divorce), went to do more groceries, cooked dinner and watched more movies.

Sunday, my last day in Queenstown… I woke up pretty sad because of it… I had now a routine and friends to hang with here in Queenstown… though it’s still not my favourite New Zealand city, and I wouldn’t live here unless I got my dream job or something super special, I still got some sort of feeling of “belonging” which I totally attribute to the fact of having many friends in such a small area.

so, Jon came to visit and to take the rest of his stuff from the car. we talked a little bit, hugged a lot, and said our goodbyes (briefly because he had to go to work)… I’m going to miss him A LOT… Mr. Pee-Pee is now a very important part of my life… this two weeks traveling together we’ve experienced all kinds of emotions and lived all kinds of experiences: from stress to peace, angry to happy, bizarre to ordinary, but above all we had a lot of FUN! we were like a 60 year-old married couple, in fact, several people we met along the way asked us if we were together haha… we argued, agreed, and disagreed like such, all the time!

I then said my goodbyes to Joel… again, hugging a lot… I am going to miss him too, in a very different way than Jon, but still a lot… we got very close in very little time, and he’s of course a very important part of my life too… we said we might see each other again, if Joel finds a car in the next few days, it is possible that he might ride to Christchurch where I will be the next couple of weeks… we’ll see what happens… but, goodbye for now… to both…