Chris and I had prepared a couple of cardboard signs to start our hitchhiking adventure with a little sense of humour… so this is what we had to show our possible drivers: 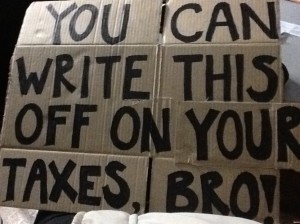 we were standing on a crossroad near the exit to the motorway… we walked there and stood for about 20 min when our first driver stopped.

her name is Susan, she saw us standing there, read our signs and decided to come back for us. she did not have to go to Whangarei or any other place other than her house in Auckland. and still she picked us up, and drove all the way to Warkworth.
she was ONE CRAZY CHICK! in the good way… she was all hyper turning the volume up with every song, laughing and saying that everything was a sign or a good omen… simply nuts! 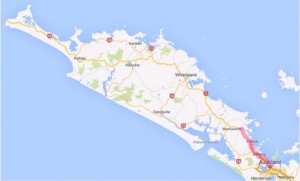 in Warkworth we got picked up by Peter, a guy that lives in Whangarei. again we only had to wait for 20 min. he was a very nice guy, interested in what we are doing in NZ and stuff. he dropped us off at the iSite where Sophie (the German girl from Auckland) was waiting for her bag to arrive.

we got picked up by the owner of the hostel where we were going to stay. there we met Paul, a very fun Dutch guy that is working in Whangarei. we were all in the same room. that night, after dinner and joking that we were like a married couple (though we were just beginning), we just had beers and played some card games.

next morning Sophie appeared, she switched hostels and was given the extra bed in our room. so the four of us went to see the waterfall and walk a little bit along the forest. we then went to the supermarket to buy stuff to have a BBQ at night. 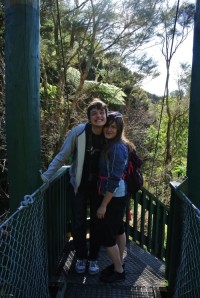 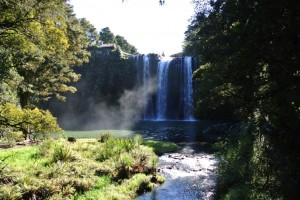 Paul went to rugby training, we got into the hot tub, and I got a message from Flavia saying she had a campervan until sunday so she was coming our way.

when Paul came back we had our BBQ with some nice beers. 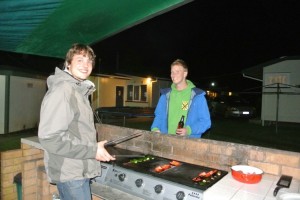 then Flavia arrived, we had some more beers with her, and then went to sleep… or did we…
it turned out that Paul and Sophie hooked up with a terrible teenager strategy that actually worked!!! she was complaining of having the upper bunk, so she simply went into Paul’s bed telling him she was not moving… I thought that was pretty lame, but after they were both in the same bed, we just started listening to this smacking and saliva sounds… very inappropriate! I did tell them that there is a big, heated, and lonely common room where they could go, but they didn’t reply… at least they stopped making sounds… for a while… at around 4 am I heard Chris telling them off because he couldn’t sleep…

next morning the five of us went to have breakfast… and then we left Paul with his new girl to take Flavia to the falls, and hit the road. 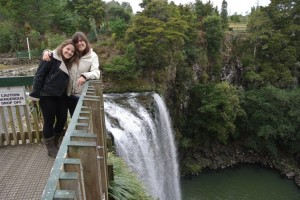 we drove mostly along the coast, stopping every now and then to take pictures, see a beach, have coffee or a cigarette… until we reached the town of Russell and stayed at a holiday park for the night. 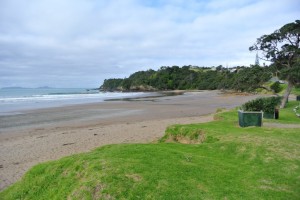 next morning we had breakfast at the beach, and then crossed on the ferry to get to Paihia. we stopped there to take a look around and then continued to Kerikeri were we got dropped off at Aranga Backpackers and said goodbye to Flavia. 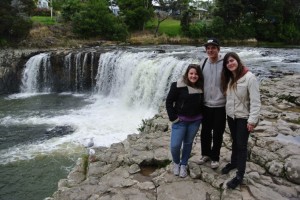 we stayed in Kerikeri for a whole week, a result of our indecision of how and where to go next and the shitty weather. 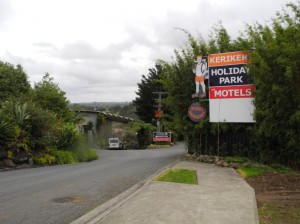 we did some walks around the area, seeing the Rainbow Falls, the Maori village and the old English houses. 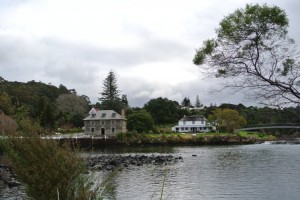 the hostel was packed with people mainly from the Pacific Islands. men and women from Vanuatu, Tonga, Kiribati, and some Maori were living there for the fruit picking season. there were also some Germans that had jobs in the area.
it was a funny hostel because we were all divided by ethnic groups: from hut 1-7 Vanuatuans, 8-9 Asian, 10-11 Europeans (or white butts), 12-14 Kiribatians, 15-24 Maori girls and others not working in farms, 41-76 Tongans and Maori boys… and the rest, who knows…

we immediately made friends with everyone.
the Vanuatuans were shy but very, very friendly. my favourites: Manuel, Kevin and Douglas.
the Maori guys were just amazing, open and friendly… and you won’t believe this, but remember I told you about the Maori guy selling his book? well, his daughter Whai was living there!
and my favourite German was Timo. 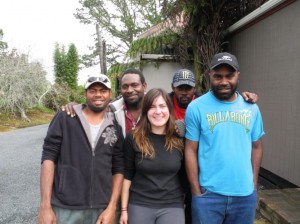 on the back: Douglas and Kevin 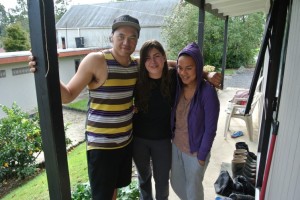 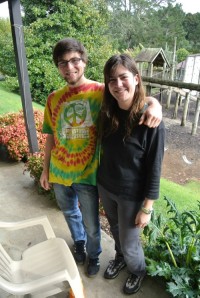 we were playing cards almost every night, drinking a lot of wine because is cheaper than beer, cooking amazing German and Mexican meals, I gave a haircut to Timo and Whai, and I got a marriage proposal from Manuel… yes! first time in my life… and he was insisting A LOT!

so after a week we decided to leave, and Timo had offered us a ride to Whangaroa because he was going near there. 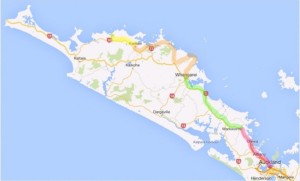 Whangaroa was a dream! a very small town with literally NOTHING, but just beautiful! I wanted to stay there forever. and the backpackers, one of the prettiest I’ve seen. 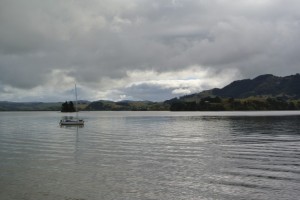 we said goodbye to Timo, and then walked around town. 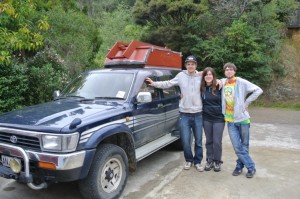 next day, our marriage dissolved abruptly… for some reason Chris was ignoring me and being a complete dick, and sadly it was affecting me terribly. after being so close this past two weeks, we now were acting like complete strangers…

I started stressing out because I didn’t know what was going to happen with the rest of the Northland trip. I was not going to hitchhike by myself, so I needed him… but why would I want to continue travelling with a person who is being a jerk? that night I confronted him, but like a teen girl he said “nothing”… “fine!” I thought, I’m definitely NOT going to beg for his attention.

next day I talked to the manager, a very sweet french girl called Oceane. I asked her about the bus or other means of transportation to get to Ahipara (where Whai is from), and after telling me what my options were, she said that she might be going to 90 Mile Beach on Thursday, so she could probably give me a ride to Kaitaia.

I confronted Chris again that day, telling him that if I do not get a ride, he cannot leave me hitchhiking by myself. he agreed… he would come with me to Kaitaia and there we would split, but he also wanted to stay in Whangaroa for a couple more days. when Oceane told me that she was going I felt a relief that I would no longer have to be with Chris… but in he end, he decided he wanted to come as well… bugger…

next morning we were friends again… like if nothing had happened. Oceane gave us a lift telling us what was cool in every town we crossed… a great travel guide!

I had contacted a host from Couch Surfing in Ahipara, so I was going to meet her in Kaitaia that afternoon, and Chris needed to find a hostel. so, like old times (or more like two days ago) we went together to find a hostel, leave our stuff, and go find something to eat. then he came with me to meet my host Riah, and we said goodbye with a big, big hug… not knowing if we would ever meet again…

2 thoughts on “the shortest marriage”