I came to New Zealand ten years ago… it moved me so much that I had a 20 year old life crisis… I tried for ten years to come back and start to live… but I was not able to do so… or maybe it wasn’t the time to do it… maybe I needed experience – both in life and work – maybe I was too young to really know what I wanted… I guess I’ll never truly know this… but I do know that I’M HERE! and I’m finally living the dream!

I arrived in Auckland on Thursday 7 of March… and since my host was working, and I really needed a shower, I had to pay for a night (though it was 9am) at a hostel downtown… this was good, because I met wonderful people from all around the world… some were just finishing their travels in NZ, some were just starting like me, so maybe I’ll meet them again somewhere this year.

my “new best friends” were Vivi from Uruguay, and Camila from Chile.
we met everyday in the city, until they left to start an adventure in India. 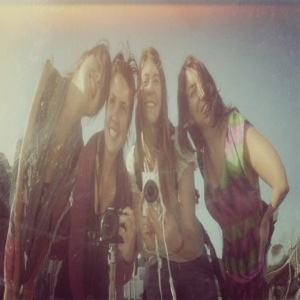 my hosts in Auckland were great! at first maybe a little distant, but I guess this is normal with anyone during workdays… but the weekend with them was awesome (“osom”)!

on Saturday I went with Jeremy to Devonport, snobby area with a lot of coffee shops, and a park called North Heads Historic Reserve next to the ocean where you can see Auckland centre from the distance (map with arrows showing where the camera was pointing)… really nice place to sit and chillax!

we walked a lot, and I think we got to know each other pretty well. he was born in South Africa but he arrived in New Zealand with his family when he was a kid. now he’s a doctor in some Auckland hospital. he speaks fluent Spanish, he’s been learning the past couple of years, and it’s funny because he’s got Spanish from Spain accent. we were saying bad words all day… those that have to do with “cojones” and “me cago en las cosas”…

next day was Gareth’s day to take me out.
he’s a really cool guy! funny, smart and a quick learner!
we went to the beach to spend the day, and then we went to eat at a night weekend market on a parking lot. heading back home we stopped at another park/volcano called One Tree Hill to see the city from above

Monday was my last day in Auckland and I just stayed home to get everything ready for my departure the next morning… at night I went with Gareth to a food court and we both had Thai for dinner.
and the goodbye picture with both! 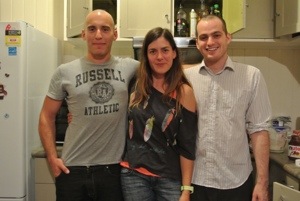 my time in Auckland still doesn’t make me feel like I’m in New Zealand. I guess it’s all the “big city” thing… it’s a nice place, but not where I would stay for long.
the Auckland Museum and the Toi o Tāmaki Art Gallery are really worth visiting, they both have New Zealand historical paintings, sculptures and artifacts.
also the Viaduct is recommended to walk around and sit at a bar to have a beer or a glass of some New Zealand wine.

I personally skipped the Sky Tower because it is expensive and there are some other places where you can see the city from above, such as Mount Eden, One Tree Hill, and of course Devonport’s North Heads Park. 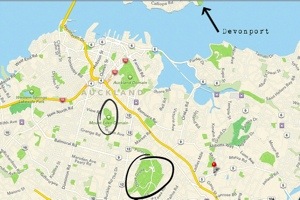